The River Leen is a tributary of the R. Trent. The Leen rises at Robin Hood’s Spring (in Joan Slut Plantation in the parish of Kirkby) and runs southwards along the western edge of the parish of Papplewick towards Nottingham. The river and valley floor form an important protective corridor for wildlife and several rare species of flora and fauna can be found either in the high quality clean water or along the river banks. 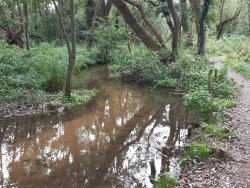 One such creature, the white-clawed crayfish (Austropotambius pallipes) can be found in the upper Leen. The Government updated the Biodiversity Action Plan in 2017, identifying 1150 species which were rare, threatened or vulnerable. The white-clawed crayfish is one of the species for which actions plans have been prepared. These species have been selected because they are the most threatened or rapidly declining and the action plans are to maintain or improve their status in the environment. Further, white-clawed crayfish are protected under Schedule 5 of the Wildlife and Countryside Act 1981 and are classified as globally threatened by the International Union for the Conservation of Nature.

Just south of where the R. Leen enters Papplewick parish, near Iron Carr Wood, it passes through a Site of Special Scientific Interest (S.S.S.I), part of the Quarry Banks S.S.S.I. at Linby. Herons can be seen feeding here in the summer months. 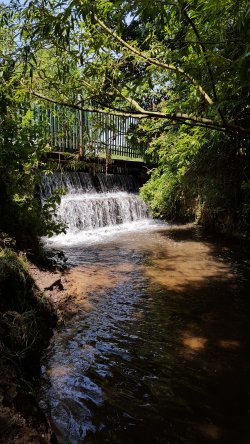 little further south (immediately north of Linby Lane), the R. Leen passes through the site of what was once Papplewick Dam, built around 1782 to feed water to regulate the flow of water between Papplewick and Bulwell, Papplewick Dam formed an expanse of open water covering almost 3 hectares. In June 1946, the owner (Hucknall Co-operative Society) decided to drain the Dam, demolish Castle Mill, fill it and reclaim the land for agriculture. Two years later, the tipping of refuse commenced and continued sporadically until 1962, however the mill building still stands. Thereafter, lush vegetation began to takeover. In 1985, Nottinghamshire County Council recognised its worth as an ecological habitat and publicly accessible amenity. They entered into an agreement with the Greater Nottingham Co-operative Society, and work got underway in 1987. A number of dangerous willow trees were felled or pollarded. Papplewick Dam is open to the public throughout the year, with access from Linby Lane at SK 547511. The site is managed by the Friends of Moor Pond Woods in partnership with the County Council.

South of Linby Lane is an area known as Moor Pond Wood, which is the remains of another former mill-pond. This is also managed as an amenity woodland, and a permissive path has been constructed through the woodland. These are favoured spots for wild fowl and amphibians, as well as woodland birds and mammals.

South of Moor Pond and Papplewick Lane, the river flows through an extensive area of reeds and associated wetland, which are rare and sensitive ecosystems. (SK 549495) The shallow water and boggy surroundings contain wetland species which are increasing rare in Nottinghamshire. They in turn support wildlife including:- Marsh Harrier, (which were recorded in 1993 as a winter visitor); Turtle Doves; Reed Warblers; Grasshopper Warblers and Reed Buntings. All these species are threatened both locally and nationally. This wetland area also provides a hunting habitat for the Long-eared Owl and a breeding place for Harvest Mice.  This area will soon be part of a riverside walk alongside the Papplewick Green estate.