The church lies to the west of the village, on a secluded site close to the river Leen. The church is a Grade 1 listed building of great
historical interest. Having said that, it is primarily a place of worship and is maintained to the glory of God. These notes are based
on “Linby and Papplewick Notebook” by the late Reverend L. Illingworth-Butler, a former Rector. 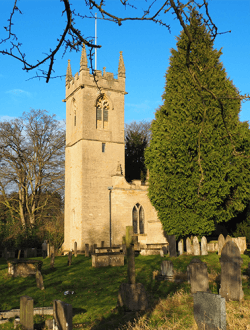 The church is thought to have been built in the 12th century. In the grant made by Henry II to Newstead Priory, part of the endowment was “The Town of Papplewick with the Church of the same name and the Mill.”. Legend has it that Alan A’Dale, one of Robin Hood’s men, was married here. The present tower dates from the 14th century. The nave and chancel were rebuilt by the Right Hon. Frederick Montagu in 1795 (after he had rebuilt the Hall.). In 1855, Papplewick was united with Linby. The Parish is now called ‘the Parish of St. Michael, Linby cum St. James, Papplewick‘. The building was further restored and repaired in 1938 in memory of John Chadburn, son of Mr. C. W. Chadburn who lived in the Parish.

There is a constant repair programme; In 1997, there was work on the tower and the bells were rehung. In 1999 the Westmoreland diminishing slate roof was replaced. Soon after, the church was affected by 1.7m mining subsidence. During the repairs the opportunity was taken to renew the lighting in the church and carry out redecoration. The path was relaid and some work carried out on the east window. It reopened at Easter 2000.

MAIN FEATURES OF THE CHURCH
The outstanding feature is the East Window by Francis Eginton. It is a copy of Reynolds’s famous window in the chapel of New College Oxford – depicting only Faith and Hope! It is signed and dated 1796.  In the window west of the porch, there are some fragments of really old stained glass, although wrongly put together.

On the floor there are incised tomb slabs. It would seem that several have been removed from their original positions during alterations of the building, while others have been cut to fit as floor stones. They are varied designs, some dating as early as the 13th century. Note should be made of the Foresters’ slab marked with a bow and arrow, horn and baldric – a reminder that this is Robin Hood country ! Two slabs in the porch walls bear bellows, the insignia of officials at the Forge Mills.

Just inside the door is the old Norman tub font. It was found in the Churchyard, and until its restoration , the tiny marble basin at the back of the church was used.  On the partition is painted the Royal Arms, perhaps placed there when the Church was rebuilt.

Another outstanding feature is the musician’s gallery. At the east end is the old “squire’s pew”.  It is said that the squire rattled the irons in his fireplace to let the preacher know that his sermon was going on too long! (Access is not possible to this area) .

Over the door is the hatchment of Miss Catherine Judith Fountayne. She was the daughter of Anne Colladon (who married John Fountayne) and succeeded to the Papplewick estates after the death of the Hon. Frederick Montagu in 1800. She died in 1822.  Elsewhere in the Church are memorials to the Montagu and Colladon families, and one to William Howitt, a benefactor of the Parish. More recent are the War Memorials to the memory of John Chadburn and Alan Chadburn.

In the belfry, there are five bells, each of which carries an inscription. One bears the trademark of the celebrated Nottingham bell-founder , Henry Oldfield, and the date 1620. The inscription reads: “I sweetly tolling men do call, to feaste on meates that feed the soule“. Another is simply marked with a cross, and the name of ELENA inscribed in old English. This bell may date back to the latter half of the 15th century.

In the porch, there are carved figures above the door. The one immediately above the door is late Saxon or early Norman probably representing St. James. The higher figure used to be set high up on the inner side of the archway, but it is uncertain whom it depicts.

The Churchyard tells a story of its own. There are tombstones of the early 17th century which is a rarity. One near the path bears the date 17012 which has caused much speculation. From the registers, it is shown that the actual date is 1712.

The Churchyard is still in use. An area for the internment of Cremated Remains has been created at the foot of the tower and a Book of Remembrance relating to this to be found on the chest at the back of the Church.

In the Churchyard stands the magnificent yew which some say date back to the days of the royal decree that yews should be planted in every churchyard to maintain the supply for the famous English Longbow. The tree is about 350 years old. The oak seat surrounding it has recently been restored.

We hope that you will visit the church. It is located at the end of Church lane, accessible from Main Street. The ‘meadows footpath’ passes the building, and provides a pleasant stroll of about one hour. It is a fine building in a beautiful setting, with its own special tranquillity. As a place of worship it is regularly used; full service details are posted on the notice board at the end of Church lane.

Other Areas of Papplewick History

Castle Mill was once a cotton mill, and later used for grinding corn

For over 100 years Papplewick had its own post office

Papplewick Grange was the mansion built by the cotton mill owners, now demolished.

The original farm on Main Street is a long-vanished feature.

The village garage closed in 2005

Some extracts describing the activities of those living in Victorian Papplewick.

The victory plantations and their monuments

Papplewick Hall and the Montagu estate

The Montagu family controlled Papplewick for more than 250 years until the estate was sold in the 1920s.

The cotton mills on the Leen

From 1778 until 1830 Papplewick was an important centre for producing cotton thread.

The changes in population

Some extracts from the England and Wales census, showing the changes in population over the last 200 years or so.